I decided that I must make a visit to the USA. At the time it seemed imperative to do so, but now that I have been and gone and done it I can’t quite decipher why this was. Yet reasons aren’t necessarily facts, and there are so many ways and means to arrive at them that the why’s are perhaps put aside in favour of subjective motivations that pull undefinable strings that resonate from within.

I do know that being there felt good, and I am wondering if my USA odyssey is over. Perhaps there is more to come? or perhaps this is merely wishful thinking, something I’m very good at – Oh how it’s so easy to deceive oneself. Never the less, the main experience was I think important to me because it redefined my relationship to Art – I felt so very surrounded by it. This helped me bolster my quavering self-image regarding my identity of a would-be maker of art. I visited three cities along the east coast, Boston, New York, and Washington D.C.

The first assignment that I made in Boston was to walk the Freedom Trail. I was never sure why or how this had come into existence, except that it wandered and looped around, passing many Bostonian historical sights. This walking day was the only time that I encountered snow while in the States, which I was rather surprised about as I expected it to be much much colder. On part of the trail, I found myself totally alone. It was quiet and peaceful, finding myself in hidden spaces that otherwise would have been totally overlooked by me. 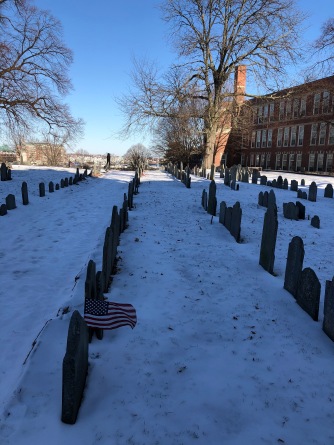 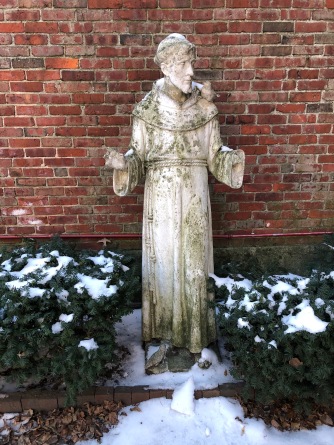 The Granary  Burying Ground – A lone statue of St Francis

Back to basics – visiting the Museum of Fine Arts. Here was a large range of paintings,  some of which were very familiar to me, others not at all. Many wonderful pictures, from Velazquez, to Van Gogh, to Mary Cassatt. It is intriguing how often Artworks travel such vast distances, finding homes in museums etc that might be far removed from the country and culture from where they were first created. It is intriguing, but sometimes worrying, i.e. how does this come about, where do funds come from for the purchases, who owned the original work, who sold it or donated it, was the artist ever involved with its distribution? It is true many sources are listed, yet there has been so much money involved with art and artefacts over the years, so much looting and misappropriation which, at times, can give rise to uncertainties and scepticism. And yet, ’tis the way of the world’ especially the Art world

A Diego Velasquez at The Museum of Fine Art – Boston

Checking out Boston, I found that Newbery Street was quite renowned for its Art galleries, and so I spent a day walking its length, dropping into galleries which seemed interesting or quirky. There weren’t many of these, however, just one or two which beckoned. The Street reminded me of some the upmarket areas of London i.e. Cork Street, with one or two obscure paintings displayed in windows giving little incentive to enter. There was one gallery showing some established and or famous names, including Andy Warhol that enticed me inside and the young woman behind the desk, was friendly and helpful. She recommended that I visit the Isabella Stewart Gardener Museum and so the next day I did.

Perhaps a case in point was met here regarding stolen paintings that have never been found. There was a great heist some years ago when famous and priceless works were disappeared by nefarious means. These included a Rembrandt and a Vermeer. The empty frames have been left to commemorate these works of art, which make kinds of installations. Isabella Stewart Gardener was a very wealthy widow and had the museum built to her very particular and excentric specifications. It harks back to medieval times and has in its centre a cloister type garden. It was an interesting visit but at the same time, it made me feel slightly claustrophobic, maybe because I felt pulled backwards instead of in my own time or the possibility of things to come. Leaving Boston I was ready to move on to New York. 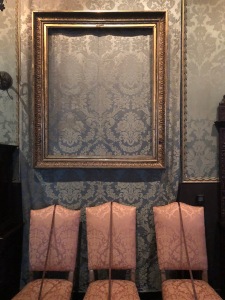 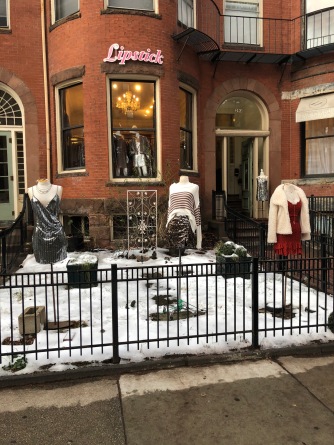 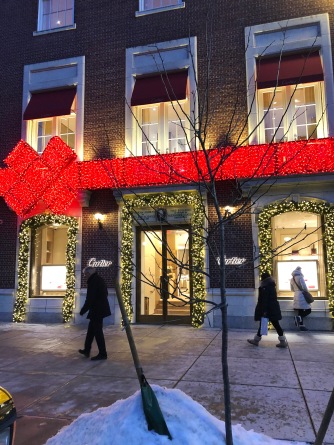